Breaking the Toxic Cycle: My Family Dysfunction Stops with Me

Breaking the Toxic Cycle: My Family Dysfunction Stops with… 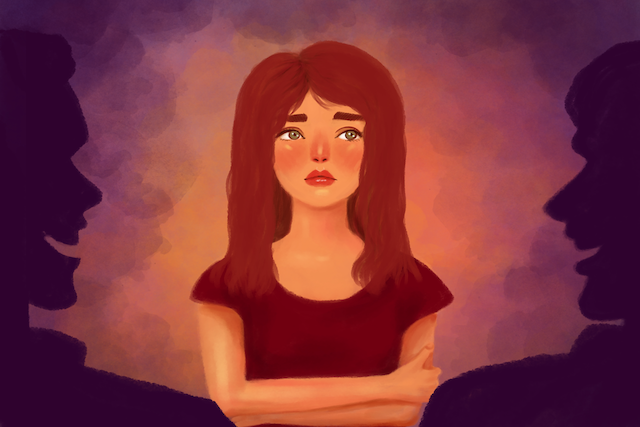 TRIGGER WARNING: This post references physical abuse and may be triggering to some people.

I will never forget, when I was twelve years old, I went to sit on my father’s lap and he told me, “No! You’re too heavy to sit on my lap!” What does an adolescent girl do with a comment like that? She hides it away and adds it to the ammunition she has begun to store up in her arsenal of self-flagellation. Shame knows no boundaries.

My father was never intentionally cruel to me. He had demons of his own. I knew that he had been physically abused as a boy and he used to tell us, or rather proclaim, “I vow to NEVER hit any of my kids!” He neglected to realize that words can hurt even more than a physical slap. And even more hurtful was when nothing was said at all.

Silence is a killer that there are no words for.

His father used a leather razor sharpening strap to beat him, and my father hung it in the kitchen of our house. I would wonder if it was a reminder of what happened to him, or was it a warning of what could happen to us? I made sure I toed the line so I would never find out. The beginning of my perfectionism.

Growing up, the one message that was crystal clear to me was that my body was not acceptable. It was reinforced in so many ways. The times my father would suggest I attend Weight Watchers meetings with my mother. But the biggest reinforcement was once a month when the Playboy Magazine would arrive in the mail. That was what a real woman’s body was supposed to look like! And the only point of reference I had.

I dealt with this by going within. I hid food and binged in secret. I used running and sports to try to counter the caloric intake. I became the perfect daughter on the outside, knowing it didn’t matter because I would never be acceptable. I fought a battle that there was no way to win. I just didn’t know it at the time. I was a teenager trying to find love in all the wrong places, with all the wrong people. In all the wrong ways.

And I wasn’t the only one. I was the oldest of four children, and my siblings all had their own demons they were fighting as well. Some people would say that the family that plays together stays together. I would add that the dysfunction in a family can not only rip a family apart, but it can also pick them off one by one.

My father was the first to fall victim. He died when I was thirty-six from pancreatic cancer after suffering a massive stroke. I am convinced that his stroke was a direct cause of his drinking and lifestyle.

My youngest sister died when I was thirty-nine years old. She was in a physically abusive relationship for nine years. Her partner and the father to her two children beat her to death.

The hardest loss was my mother, who died when I was fifty-two. She had suffered from dementia for years. but ultimately it was lung cancer that caused her death.

At fifty-six, my second sister died of an accidental overdose of heroin. She was fifty-five.

And lastly, my only brother, who is still living, is recovering from laryngeal cancer and now uses an artificial voice box.

For the longest time, I would wonder when my time was coming. People would tell me that my family was cursed, and the temptation to fall into that camp was appealing. Just let the chips fall where they may! But the truth of the matter was that, like for us all, there are consequences for our choices. I know that sounds harsh considering that I have lost most of my family, but I cannot make it be anything it is not. And believe me, I’ve tried!

My codependency was strong, and I tried to save them all! And in the process, I was losing myself. I was tired. I was sad, I felt defeated. But enough was enough.

I had made the decision, when my husband and I adopted our only daughter, that the dysfunction was going to stop with me.

I had a lot of work to do on myself. I had to uncover all the lies I had believed about myself. About my life. And then I had to choose new things to believe. I had to unearth all the ammunition I had used to build the walls I had cemented around myself. The walls that would have strangled me if I had let them.

But that is my work to do now. And because I made the decision to do that work, my daughter is a healthy, well-adjusted young woman in her third year of college.

My work was to take the box down from the closet. You know the one, where the secrets hide. And if I just keep it up there, no one needs to know. But I knew I had to open that box and take them all out. Then I could decide which were real and which were imagined. Which ones had to go and which ones I could work with.

Life is a series of turning points. And we get to decide, at any time whether we keep moving forward or whether it’s time to turn around and begin again. We are never too old to keep moving forward. And we have never made a mistake that cannot be forgiven. A wrong that cannot be made right. I have forgiven myself for many mistakes. Many hurts I have caused. I have made amends. I keep taking the next right step.

I am fifty-eight. I have forgiven those who have needed to be forgiven. I have grieved the family I wished I had. And I continue to grieve the loss of those who have died far too young. And the relationships that will never be.

I no longer run from the loneliness that catches up to me from time to time. I just don’t stay wrapped in it for too long. I have shed the shawl of shame I have carried around me and work everyday to find the light and the beauty within.

And I continue to remind myself, every single day, that it is not too late to become who I was created to be. My work is to keep doing the work and find my way home. Home is a place within. A place of wholeness. A place where self-forgiveness and self-acceptance merge. And beauty abounds.

Kim is a writer, a coach, and a person who has a passion for helping women find their true self and their home within. A coach whose heart is to help women believe in themselves again and realize it isn’t too late to become who you were created to be. You can connect with her at Kimconnelly.com or on Facebook @ItsKimConnelly

The post Breaking the Toxic Cycle: My Family Dysfunction Stops with Me appeared first on Tiny Buddha.

All It Takes Is One…

All It Takes Is One…

The Many Shades of Support:…

How a Highly Sensitive Person…

The Messiness of Being Human…

Why Fibromyalgia Is the Greatest…

Why Fibromyalgia Is the Greatest…

Disordered Eating: What We Need…

3 Reasons Why It’s Hard…
CLICK FOR A FREE SESSION